Big boxing returned to the Mother City last Friday with a number of impressive battles, including the WBF junior middleweight bout between eventual winner Christiano Ndombassy and Jami Webb, at the Pollsmoor Recreational Hall in Tokai.

Ndombassy lived up to his reputation as the favourite and won via points’ decision with judges Clifford Mbelu and Simphiwe Gceba scoring 94-92 and 96-94 respectively in his favour while the third judge, Fred van der Ross, handed Webb 97-93.

Ndobayini, from Soweto, had good slips and overhead punches, but they were not effective enough to disturb Rankin.

Rankin’s work ethic proved unstoppable from the first up until the last round.

In another international fight, Iran’s warrior, Mo Alli beat Malawi’s Mussa Ajibu via a third round TKO in the heavyweight bout.

Table View’s Dillon Solomons made it two out of two in his professional boxing career after beating Cedric Ntsendula, from DRC, via a unanimous points decision.

The MadFit Gym boxer, Solomons, said although he won, he will go back to the drawing board to work more on his explosives and improve his fitness.

“It was nerve-racking. I was very confident. My last fight was a bit rough. This fight I made it two out of two,” he said.

Durbanville’s Daniel Pontack made a bold statement in the flyweight division after stopping The Box fighter, Thobela Breakfast via a TKO in the third round.

“I’m very grateful to be back. We haven’t fought in over a year because of the pandemic. It’s been extremely difficult. It felt nice to be back with a decent performance,” said Pontack.

Breakfast, from Makhaza in Khayelitsha, said fatigue let him down at a crucial moment.

Kraaifontein’s Emile Brits had good slips in his fight against Henry Kuyaya from Mpumalanga.

Brits could have, arguably, ended the fight in the early rounds if he had a follow up punch from his slips, but than again, it was the PFA fighters professional debut.

“I feel disappointed. Even though it’s my debut I wanted to perform a little better and cleaner. I wanted to make him miss more and produce a knockout. I will drop some weight to welterweight,” said Brits.

Kuyaya’s coach, Abraham Lubisi, from Lubisi Boxing Club in Mpumalanga, was in disbelief, saying his fighter deserved to win.

The fight could have gone either way. The scorecards, via a split decision, went in favor of Chellan.

Both fighters were well conditioned, hungry for victory. They showed perseverance from the beginning up until the end. They went at each other in every round.

Both of their corners, too, were vocal from the trainers to the cutsmen.

After the victory, Chellan said he was not looking for a knockout, but was testing how to see if he can go the full rounds.

“I never underestimated him. He has got more experience. I’ll try to improve more and work with the team and management for the next fight,” said Chellan.

Kotobe said: “We worked very hard for the fight. I was at the gym every day. I told myself I will win this fight but it didn’t go my way. I’ve learnt from it and in boxing you have to work for knockout because points can go any way.”

Pancho Alli Samba was knocked down in the second round by Gqeberha’s Darrin Rossouw. Strangely, he got up and fought like a possessed man.

Samba, however, was without a trainer or a cutsmen in his corner, he was helped by The Box coaches, while his gym partner, Ntsendula instructed him from the stands.

“My opponent came with a big right. I knew he was going to swing. After this win hopefully there are a lot more fights awaiting this great year,” said Rossouw.

Samba said it was not easy, his opponent is a boxer who came to fight.

PFA’s Juan Roux, from Brackenfell, said his lucky pink underwear helped him bag a big win against the experienced Nico Yamdi in the heavyweight bout.

Roux’s coach, Mike Mouneimne said his fighter has a mentality of a champ. He fought his heart out. He made it look easy. He is going to get better. This is his fourth pro fight without an amateur career”.

Yamdi, from PFC in Bothasig, said he’ll bounce back stronger from the loss.

2/5: Jami Webb vs Ndombassy for the WBF International Title. Ndombassy won via points.

3/5: Dillon Solomons got his debut win over Cedric Ntsendula from Congo. 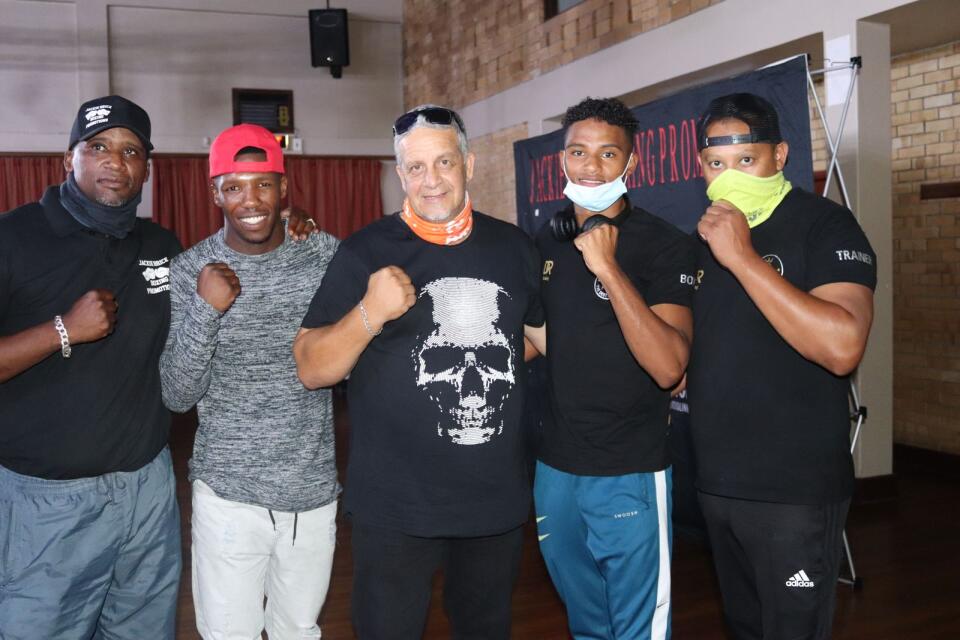 5/5: Kuils River’s Jami Webb stunned the naysayers last Friday by going all the way against the experienced Christiano Ndombassy in the main bout at Jackie Brice Boxing Promotions event. Webb lost via a points decision for the WBF International title belt.